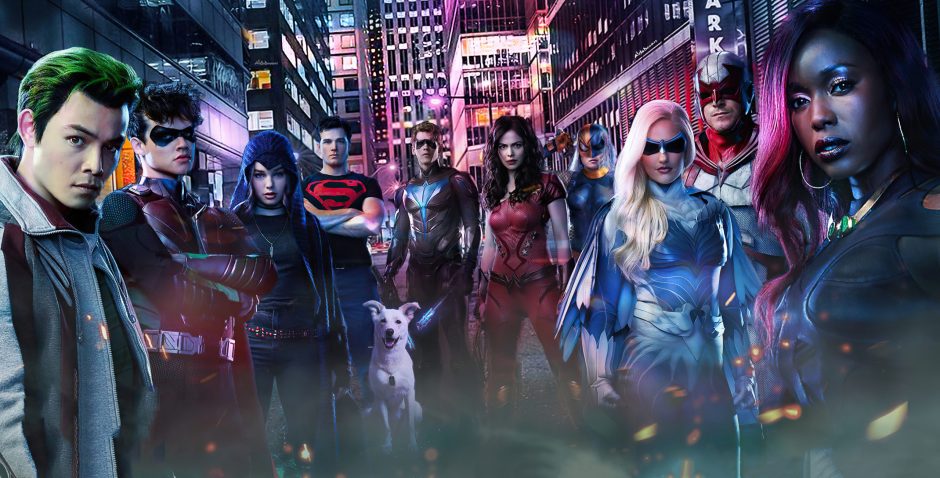 Ever since Titans first premiered on the DC Universe Streaming Service, I always felt it was a pretty underrated superhero show. It seemed to get a lot of criticism, that I think, it didn’t deserve. Even Season 2 was a big improvement on Season 1, in my opinion. My theory, is that the series is a fairly dark interpretation of the Teen Titans mythology. Titans premiered right around the time many fans were souring on what they believed was overly dark and grim tone of the DCEU movies like Man of Steel and BvS. Regardless, it’s not a perfect show by any means, but for me at least, Titans has always been an absolute blast. Season 3 looks to be the best yet, adding Scarecrow, Red Hood, Blackfire, and Barbara Gordon to an already fun ensemble of DC characters. The first two seasons are available now on HBO Max. I definitely recommend giving it a shot, especially if you’re a DC fan. Titans Season 3 premieres August 12 on HBO Max. Take a look at these cool promo images, and watch the new trailer right here:

This season also sees the debut of Tim Drake, the 3rd hero to take up the mantle of Robin (pictured below). Tim eventually comes into his own as The World’s Second Greatest Detective, Red Robin.

Follow us on Twitter @PJWrightWBM, Instagram @worldsbestmedia2017, and our Facebook Page, Worlds Best Media. Those likes and follows, as well as iTunes reviews, go a long way to supporting World’s Best Media. We really appreciate the loyalty and support shown to us by our fans, so thanks again! Stay healthy and stay safe!

UPDATED: In a move that will have a massive effect on the filmmaking business, Warner Bros/DC have announced that Wonder Woman 1984, will be simultaneously released in theatres and HBO Max on 12/25/20. The movie will be free for anyone with an existing HBO Max subscription, there will be no extra charge like Disney+ did with their release of Mulan earlier this year. This is some damn good new and I’m psyched to finally see WW84!

We will keep you updated as more information becomes available….

Trailers are one of my favorite aspects of the moviegoing experience. Even if the final film turns out to be a complete piece of dog shit, a great trailer can be thrilling and rousing, it can spark your imagination. Of course, as i’ve said in the past, in some ways the art of movie trailers has disappeared for the most part, every once in a while a trailer comes along that blows your socks off. Whenever I find an interesting trailer, I always make a point to post it here on the website to share it with my audience. So I’ve been thinking about making it a little bit more of a formal, weekly column series called “Trailers of The Week”. Sometimes there are trailers that I’d really love to share with you guys, but they don’t necessarily marry their own article here on the website. This way I can let everyone know about all of the interesting trailers I’ve come across each week. Some weeks are going to be better than others, but hopefully will get more fantastic trailers than average ones. So without any further do, I think I have two pretty cool trailers to share with you guys this week.

The first, is the latest trailer for Justice League: The Snyder Cut, premiering on HBO Max early 2021. It contains a lot of footage that we saw in the first trailer, but some interesting moments are expanded, we get a better look at some significant characters, and there is some new and interesting material as well. I have made it no secret that I am extremely excited for this project, I really hope Zack Snyder is able to silence his critics and give us something very unique and interesting for those of you who don’t know at this point the Snyder cut is so long that it’s going to be released as a miniseries on HBO max, I think it’s about five or six hours at this point, I’m not 100% sure. One thing is for sure this is going to be damn interesting superhero project to watch when it finally comes out.


On to our second trailer…

As I’ve mentioned before, I’m a huge fan of the DC Animated Movies that come out three or four times a year. This new film, Batman: Soul of The Dragon, looks particularly interesting. I love the whole retro 70s style and the Bruce Lee, Enter The Dragon “vibe”. Bruce Wayne is one of the best fighters in DC Universe, so it’s very interesting to see a younger Bruce training to become a deadly martial artists. DC Animation have put out their fair share mediocre films, but every now and again they knock one out of the park. Hopefully, Batman: Soul of The Dragon is the former. I love the new aesthetic and unique story. I’m definitely looking forward to give this movie a watch.

Justice League: The Snyder Cut: Premiering on HBO Max sometime in the first half of 2021

It’s a great day to be a DC fan! DC and Warner Brothers just dropped the first trailer for Wonder Woman 1984 and it looks pretty damn cool! The first film was excellent and Gal Gadot crushed it in the role. Now that the origin is out of the way and audiences have become familiar with the character, the filmmakers are free to take the Wonder Woman story in any direction they want. Gal Gadot beautifully embodied Diana and everything she stands for in the first Wonder Woman. A film that solidified her status as the perfect person for the role, especially after being a highlight in movies like Batman V Superman and Justice League.

I’m a big Batman V Superman apologist, I actually love the film despite its many flaws and Wonder Woman is one of the big things the movie has going for it. Justice League on the other hand is arguably the worst film in the DCEU (or The Worlds of DC or whatever the fuck they’re calling it now), yet she shines as Wonder Woman in an otherwise poorly conceived and executed movie. With this much success as the character already under her belt, Wonder Woman 1984 has the potential to push Gal Gadot’s Wonder Woman into icon status. I hope they’re able to do something exciting that isn’t a retread of the original movie, but still captures the spirit of what makes Wonder Woman great.

Of course Chris Pine returns as Steve Trevor. It will be interesting to see exactly how they choose to resurrect the character or bring him to 1984. This isn’t supposed to be a different person who looks exactly like Steve Trevor, like his grandson or something. This is the same man that Diana knew during WWI. To be honest, I don’t particularly care about the details, I like the character and I’m happy to see him return in this movie.

I was a little disappointed that we didn’t get to see Cheetah in this trailer. That’s the character played Kristen Wiig. There are several different versions of Cheetah, but the one I’m most familiar with and the one I hope they use is Dr. Barbara Minerva.

Dr. Barbara Minerva was an archaeologist who became friends with Diana. Her specialty was mythology and ancient cultures that existed around the time Themyscira was created. Through a bizarre series of events that I won’t get into here, she’s cursed by some ancient god into becoming a cheetah-like monster. The transformation made her overly violent and bloodthirsty, but for the most part she retains her human mind. In some versions she directly blames Diana for her condition. I’m really excited to see if they do this character design justice. In my opinion, CGI motion capture would be the best way to go, I’d like to see them lean more into the monstrous cheetah side than the more human look we’ve seen in other iterations. I’ve included some images from a recent Wonder Woman story by written Greg Rucka with art by Liam Sharp. They’re good examples of the direction I hope the filmmakers go with for Cheetah’s design…

On the flip side, I was very pleasantly surprised to see the inclusion of another classic DC anti-hero/villain: Maxwell Lord. Played by Pedro Pascal who’s currently wowing audiences in The Mandalorian, will be playing Maxwell Lord, who I had no idea was even in the movie.

Maxwell Lord is a wealthy businessman who has a long and dark history with the Justice League and Wonder Woman in particular. At one point he fully funded the Justice League a classic JL run in the 80’s called Justice League International. It was later revealed that he was a meta-human with telepathic powers and this long time ally to the Justice League was actually a much more sinister figure than anyone knew. So that’s a really fun character to throw into the mix because they could play him in a lot of different ways.  In addition to the trailer also got some really cool character posters (featured throughout the article) The posters for the first Wonder Woman movie were fucking works of art and these posters are certainly unique. I especially love that golden wing armor that we see Diana wear in the trailer, if they make a poster with that costume I will most certainly be buying a copy. Anyway, this is definitely high on my list of most anticipated films of 2020, take a look at the trailer right here: