It’s Paul, today we have the next piece of our series of articles looking back at The Star Wars Saga with Episode V The Empire Strikes Back. Our guest writer today is Marc Rodolfo who is a Incredible wordsmith. He’ll also be writing our Return of The Jedi article which I’m excited for you guys to read, (it’s one of my favorites from the entire series of articles). Without further ado, please enjoy our article on arguably the best Star Wars film: The Empire Strikes Back… 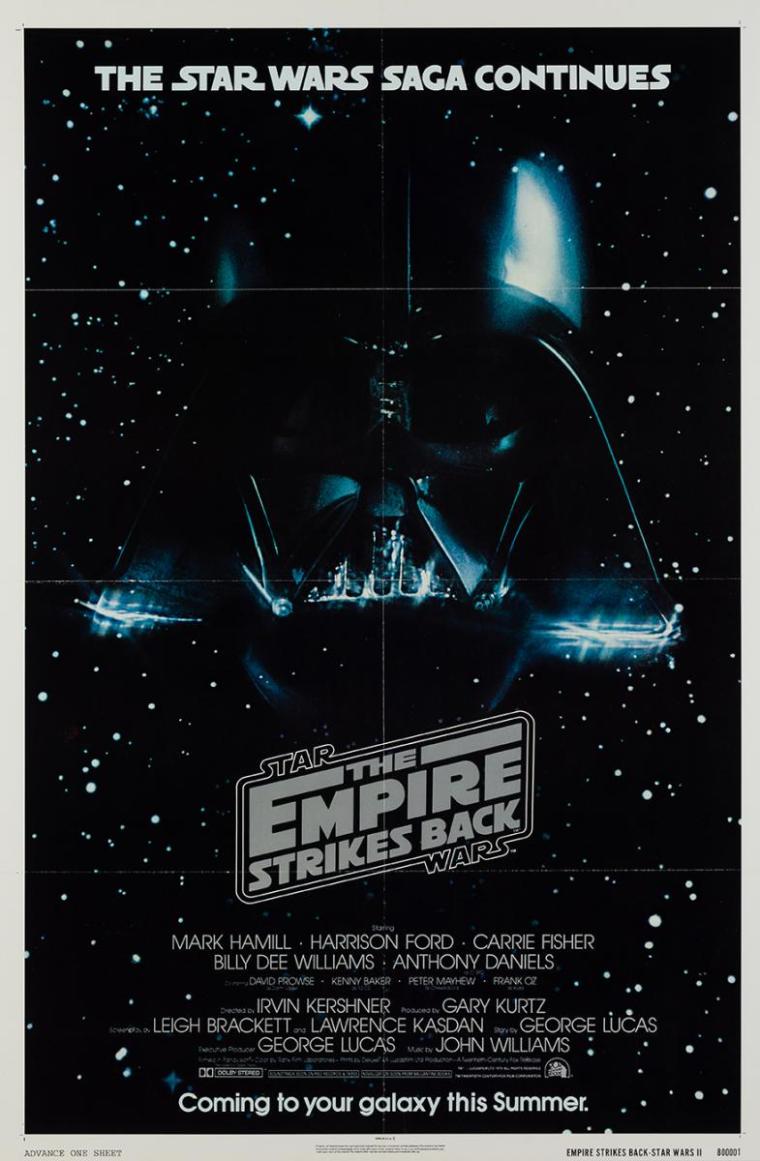 The Darkside of Dagobah: Reflecting on The Empire Strikes Back

Empire…Empire…Man…If you tell me that A New Hope truly made you a Star Wars fan, I simply, and unequivocally, don’t believe you. And I mean, a true fan. I’m sure you liked A New Hope. I am sure you thought it fun and interesting and if pressed you may even admit you WERE a fan. However, it was Empire that truly made you a fan. Empire that turned you from a fair-weather Storm Trooper (puns!) to a Darkside lovin’ Darth Vader. This is how it was for me and for the purposes of this article, for you too.
What follows is a piece written with an unmitigated love for the best Star Wars film ever…and yes, I am going to be THAT stubborn and say it will be better than Episode VIII and Episode IX and any A Star Wars Story movie that is bestowed upon us in the future. Because this is Empire and Empire changed the essence of Star Wars. Empire took a franchise that was supposedly created for the enjoyment of children and made it for everyone.

It’s funny, I don’t really have a nostalgic story for Empire like I do for A New Hope and, as you will see in the next article, for Return of the Jedi. All I truly remember is that I went to the movie theater and I saw the movie. I don’t remember who I was with. I don’t remember if it was at the old General Cinema in Shopper’s World or the new AMC “A Lesson in Excess” Theater. I don’t remember the trailers or the ticket. I don’t remember if I got popcorn or soda. I don’t remember anything except for the movie. All that mattered was Empire. Yes, once the auditorium lights dimmed and the excited voices drifted off into soft murmurs and then to silence and the opening crawl accompanied that oh-so-familiar theme, I was back: enraptured in a universe that the previous chapter didn’t quite prepare me for…

And as the opening preamble drifted upwards and the camera panned down towards this new planet, the hushed silence of the theater began to echo the icy azure aerospace of Hoth. Soon though the silence would be broken by a roar, a flash of a lightsaber, mumblings about someone called Yoda, and the incoming Imperial onslaught of the AT-ATs. Those AT-ATs…I mean, the Death Star was huge, sure, but it never really gave a menacing presence. It was just a giant steel ball after all; a “small moon.” But these new machines, these new tanks, looked like giant mechanical camels or elephants or something and slowly, they stalked towards their tiny prey, not unlike a monster in a slasher flick.

And then, we got Vader. The last we saw of him he was spinning away into the eternal blackness of space. But now he was back, on the ground, and cutting rebels down left and right. Sounds of lasers, explosions, and the whirring of a red lightsaber pervaded the once tranquil theater. We were all on the edge. 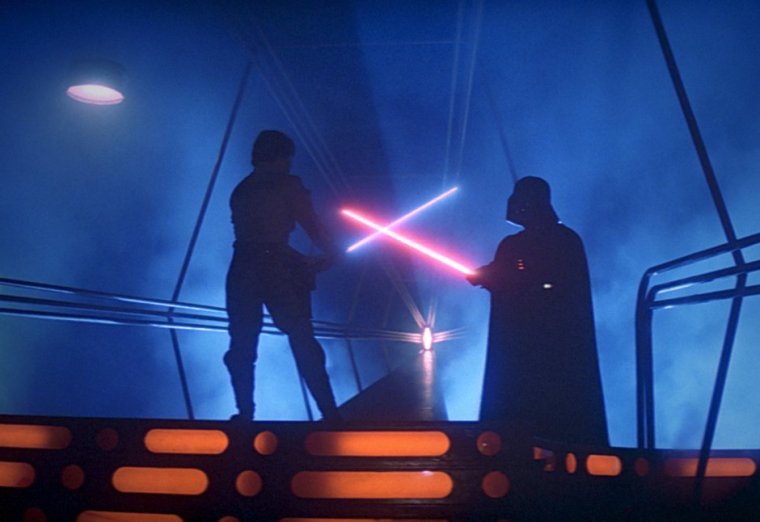 Empire started with a bang and continued throughout with more and more revelations: “I am your father!” (Notice he didn’t say Luke first?) Force ghosts. Removable hands. Immovable Hans. Betrayals and backstabbing. Cities in the clouds. And an ending…an ending that tipped us over that edge. 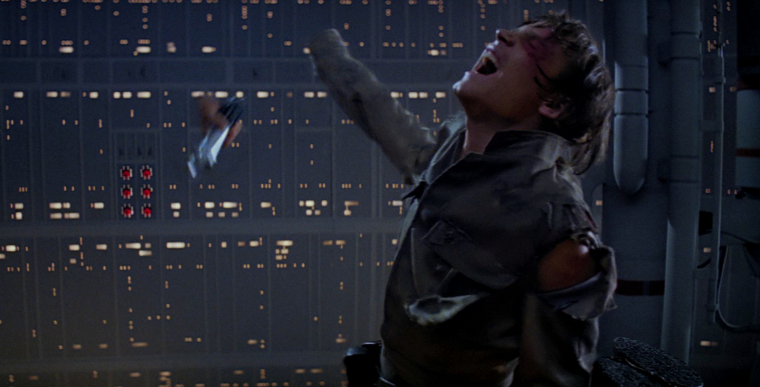 I’d be remiss if I didn’t mention Yoda. But let’s face it-Yoda was a risk. In a complete tonal shift from the maturity of the movie, we got a seemingly goofy puppet with a weird backward voice. We all complain about Jar-Jar, but if Yoda wasn’t putting us on and pulling a fast one, he would have made no sense in that movie. Luckily for us, it was a ruse; it was a test for Luke to see if he had the patience to start his training. It was then that Yoda quickly went from just another Star Wars muppet, to the wizened Jedi Master we know today. It was from Yoda we learned the true extent of what “the force” was capable.

More than a “bad feeling about this” (a cliche that is uttered over ten times throughout the movies and is even mocked in Rogue One), more than intuition, more than mental connections, the force was a strength that awed even the most skeptical of us (Han Solo-lookin’ at you). It was Yoda that made us all, and I’m admitting it, actually try to move things with our minds. Yoda who taught us even the smallest of us can have strength and power as well as wisdom. Yoda that taught us the path to becoming a Jedi was found in patience and virtue. Yes, our little Buddhist monk quickly became a fan favorite. 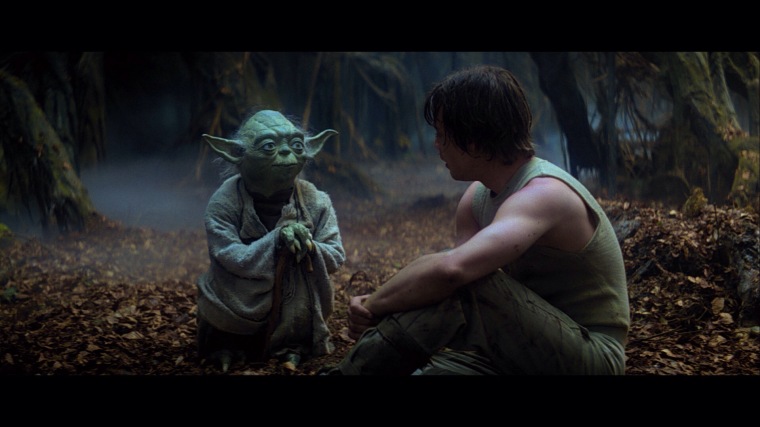 The Empire Strikes Back is one of those rare near perfect films. It brings back old characters and introduces new ones that quickly became fan favorites. It is the movie that cemented the Star Wars fandom and expanded it from a somewhat claustrophobic space opera (Episode IV was really only Tatooine and the Death Star) to a vast open wide space epic. From tundra to jungle and cave, from space to cloud and sky, each of Empire’s set pieces is as epic as the next and each moment is as memorable as the last. It is the Star Wars movie that created a universe.

May The Force Be With You…

One thought on “STAR WARS RETROSPECTIVE (PART 5): EPISODE V THE EMPIRE STRIKES BACK”