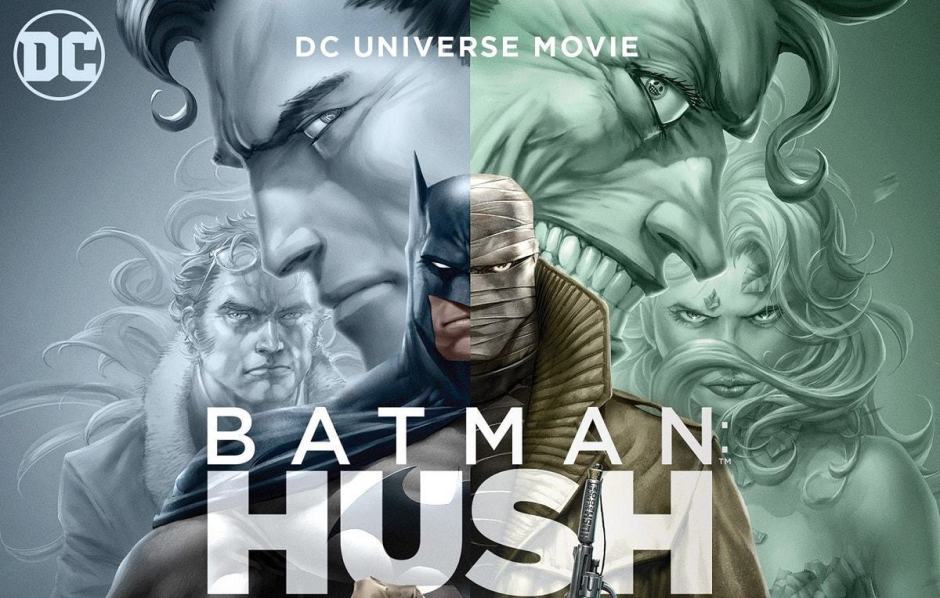 I’ve said it before and I’ll say it again, I love the direct to Blu-Ray and Digital DC Animated Movies. There’ve been some real classics to come out of these projects. Movies like Batman: Year One, The Dark Knight Returns: The Deluxe Edition, Justice League: The Flashpoint Paradox, and Batman: Under The Red Hood, just to name a few. While there have been some enjoyable standouts, there hasn’t been a real homerun from these films in a while. Though Batman: Hush may not knock it out of the park, it comes damn near close. Based on the classic Batman run by writer Jeph Loeb (Batman: The Long Halloween) with art by the legendary Jim Lee (Justice League, X-Men), Batman: Hush does a great job of adapting this seminal Batman tale while still fitting the movie into the animated continuity (or DCAU) that DC created beginning with Justice League: War. The result is a pretty damn good movie that is less of a mystery and more of a tragic romance. Which may irk some fans, but I’ll get into more of that in a moment.

I’ve heard some people complain about the animation in these films lately. Critics say that copying the general aesthetic of The New 52 and attempting to adhere to a visual continuity, makes each of these movies feel overly similar and blocky. Well, that issue isn’t completely absent from this film, but there are some notable efforts to step up to quality of the animation. Some shots feature fantastic little details that immediately draw your eyes. How someone’s eyes and face move before something dramatic is about to happen, the way a fight move is pulled off, small moments scattered throughout the film that make it feel as if the animators were going the extra mile and it shows.

The real highlight of the movie is the relationship between Batman and Catwoman. It’s so rare to see Batman in a successful and a functioning relationship. I should mention that Selina doesn’t know that Bruce is Batman at the beginning of the story.

It’s only when things begin to get serious that he reveals himself to be Bruce Wayne. In fact, there is a funny scene when he brings her to the Batcave for the first time and she’s enthusiastically greeted by Dick in the Nightwing uniform without his mask and Alfred attempting to serve her tea. When she‘s surprised to realize that Dick and Alfred know that she’s Selina Kyle. She even half jokingly asks “Does everyone know who I am?“ Dick blurts out “No, just us and Damian.” Selena asks “Who’s Damian?”, “Oh he’s Bruce’s son… He’s Robin.” Replies Dick with an awkward look on his face. It’s easy to see how being an intimate part of Bruce’s life isn’t so simple, which is why he and Selena are so perfect for one another. He is drawn to Selina as both Batman and Bruce Wayne and that’s where the key to their success of the relationship lies.

If Bruce and Selina are out on a date and The Bat Signal appears in the sky, Bruce doesn’t have to make up some bullshit excuse. She’s more than capable of coming along with him to stop whatever threat he’s facing and it even feels like a natural part of their “date night” that they both seem to get off on. Catwoman may have been staying on the straight and narrow, but she loves this world, she loves being part of a good fight. In fact, I think if she was dating Bruce and he didn’t have the Batman aspect to his life, the relationship wouldn’t work. Selina needs those kind of thrills.The film is mature enough to acknowledge that this relationship wouldn’t have worked if it began when they were younger. Maybe there would’ve been an intense fling, but nothing more. They’ve both matured, changed, and they both want different things than they did years before. It’s at this point in their lives that they’re ready to be together as both Bruce Wayne/Batman and Selina Kyle/Catwoman.

When comparing the graphic novel to the film, it’s important to remember that the  Batman: Hush graphic novel is a mystery at it’s heart. Who is Hush? Why are they doing this? Well the movie managed to do a great job with staying relatively faithful to the source material, while still managing to surprising fans of the graphic novel. Love it or hate it. Many of the iconic moments from the comic book are present in the film. Some are even slightly improved upon. However, there is one classic scene from Batman: Hush that was adapted to the film, but (without going into SPOILERS) the scene felt like it needed to be a little bit longer. I was impressed how Hush managed to both surprise those of us who’ve read the comic book, while still being faithful to the source material in a unique way. To say much more would be a SPOILER, but you’ll know what I’m talking about when you see it. You may think you know where the story is going, you may think you know the identity of Hush (and maybe you’re right), but things play out just different enough to make things fun, interesting, and surprising.

The final fight between Batman and Hush is particularly well animated, well choreographed, and thrilling. The animation of the fight has a very dynamic quality. Batman employs one of my favorite tactics of his, that we’ve seen in animation and comics many times, but almost never in live-action: He gets in the villains head to gain the upper hand. He plays mind games with his opponents and that’s used here to great effect. Batman use his genius, his ability to manipulate the psychosis of the villain he’s facing, to exploit their fears, insecurities, and weaknesses to give him that extra edge for the win. Batman’s greatest weapon is his intellect.

The combination of the surprising reveal of Hush’s identity, the fantastic animation, and Batman using his intellect to exploit the mental and emotional weaknesses of his opponent, make this for a pretty memorable final battle.

It should be noted that Selina Kyle/Catwoman is a notorious criminal and accomplished superhero in her own right. However, Batman can be such a larger than life figure, that it would be easy to make even the strongest of women look like a damsel in distress in one of his stories. The film does a great job of avoiding problems like this. Selina is her own woman. Her choices are not defined by Bruce’s choices. She doesn’t necessarily need his help to get out of some of the most serious jams she finds herself in throughout the movie. Particularly in the climax of the film, Selina finds herself in a very precarious life and death situation. I’m fairly certain she would’ve been fine, whether Batman showed up or not. The storytellers did a phenomenal job making her an interesting capable character.

At the end of the day this is still a love story between Batman and Catwoman. The sad realization of how, at least in this point in their lives, that love story is also a tragedy. Bruce lets Selina in, in a way we rarely see from this character. There comes a point in the story, when Bruce makes a decision that looks like madness to Selina. In fact, it would look like madness too many of us in the audience. Once the threat has been neutralized and the villain dealt with, Selina has an epiphany. She realizes that no matter how much she loves Bruce, no matter how much she changes for him, no matter how much more she’s willingto change for him, he won’t change himself.

There are things he will not become. There are lines he cannot cross. Because of that Selina will always come in second place to Bruce. She willing to let herself evolve with this relationship, but she realizes that in the end, Bruce is an immovable object she’ll break herself against. It’s profound, it’s sad, and it’s veryBatman.

Batman: Hush is a flawed, but solid Batman mystery/adventure with a fantastic romance story, great fight scenes, some stand out bits of animation, and some surprisingly thought-provoking character and story elements. Some things land better than others and I think the film may have benefited from another 20 minutes or so of storytelling to help flesh out some of it’s more interesting ideas. The climax in particular feels like it comes out of nowhere, when there should’ve been a bit more tension and build up to Batman‘s final confrontation with Hush. Whether you’ve read the original graphic novel or not, this movie will still keep you guessing.

While not the complete return to form I was hoping for from Warner Bros/DC Animation after the strong combination of The Death of Superman/Reign of the Supermen, I’d say this is still a MUST WATCH for any Batman fan!