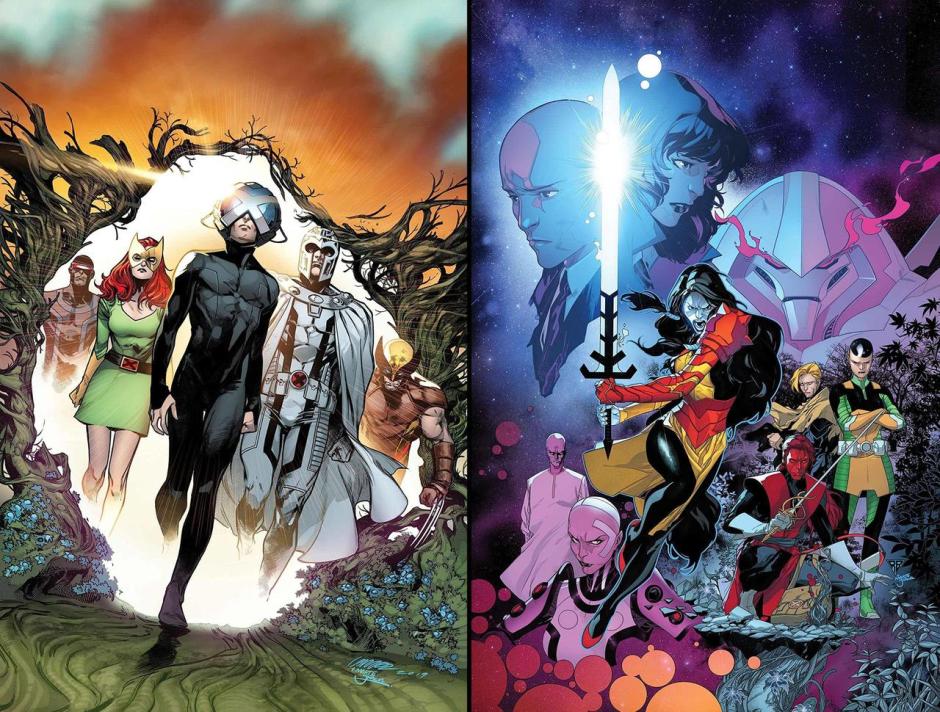 Look for a MUCH MORE detailed take on today’s subject coming in the near future, but I couldn’t wait any longer. I had to get the word out about what Marvel Comics has started with their X-Men books! You guys know that I love an excuse to write an article about comic books. It doesn’t matter if you’re a long time reader or someone who’s seen the X-Men movies, but never actually read a comic book: PICK. UP. THESE. COMICS!!!!!

Last week Marvel launched writer Jonathan Hickman’s vision for the next several years of X-Men stories with two interconnected miniseries: House of X and Powers of X. House of X #1 came out last week 7/24 and Powers of X came out this past on Wednesday 7/31. Each 6 issue miniseries will be coming out every week, alternating between the two. So next week House of X #2 will come out and the following week, we will get Powers of X #2 (New Comic Books come out every Wednesday for you new readers out there).

I don’t want to say too much because these books are too good to give away any major SPOILERS, so I’ll keep things vague. The plan is that Jonathan Hickman is writing House of X, which will deal with the new status quo of the X-Men being chronicled in that book. While Powers of X will look at Mutants during crucial moments for their species throughout the past, present, and future of the Marvel Universe. The idea is that the events of each book play off one another, so something that happens in Powers of X will make you look at the events House of X in a new and different way.

Having read both books, I can confidently say that they’re phenomenal. They immediately grab you’re imagination in ways I haven’t had a comic book do since probably one of Hickman’s last superhero books. You really should read these for yourself, but I will say House of X is about Charles Xavier, and Mutants as a species, in a dramatic and unique new status quo, that has the whole world and even other Marvel superheroes… concerned to put it mildly. Trust me, you’ve never seen the X-Men quite like this before. Charles Xavier has united Mutants in a unique way for the first time and he’s putting the world on notice. Xavier doesn’t want trouble, in fact he wants to help the rest of the world. But Charles Xavier wants one thing made very clear: Mutants are DONE asking anyone’s permission for anything. Charles has a plan and he doesn’t much care what the rest if humanity thinks about it. In other words “I’m here to help… but stay out of my way.”.

Powers of X #1 jumps into 3 points in time. The not too distant past and two very different points in the future. The parts of the story taking place in the future definitely deal with how the consequences of the events of House of X #1 effect The X-Men and Mutantkind in the years to come, but I don’t want to say any more than that.

One of the coolest devices both of these books employ, are pages of prose sprinkled throughout the books. They’re designed to look like very cool computer encyclopedia pages, with fascinating information that explains places, characters, and events going at that moment in the story and puts them in greater context. You really have to read it to see how cool and effective this storytelling device is.

I’d be remiss if I didn’t mention the incredible art in both of these books. Pepe Larraz handles art for House of X and R.B. Silva does beautiful work as the artist on Powers of X. Neither of these stories would work without the spectacular contributions of both of these artists.

The two miniseries’; House of X and Powers of X are the preludes. When they conclude their 6 issue runs, Marvel is relaunching all of their X-Men books. The events of House of X and Powers of X will lead into Marvels flagship new X-Men book, X-Men #1 written by mastermind Jonathan Hickman with art by Leinil Francis Yu. As his work on Avengers, Fantastic Four, and Secret Warriors attests to, Hickman is known for telling epic, sprawling narratives. With story points sometimes paying off years later in a book, through Hickman’s meticulous planning. However, it never reads like a drawn out, overly long tale. It’s more like an edge of your seat saga, filled with twists, turns, surprises, and great payoffs for long time readers. Hickman plans to bring this same kind of storytelling to the X-Men and I’m here to tell you, he’s off to one hell of a start and I can’t wait to go along for the ride.

You can buy House of X #1 & Powers of X #1 at your local comic book store (which you can find using the link below), most Barnes & Noble, or digitally on your tablet or other device on ComiXology.

Find a Comic Book Store near YOU, right here: https://www.comicshoplocator.com