Wow! That trailer… man, it just blew me away. This was the footage shown at D23 this weekend. I was still coming off my Marvel summer high. After Avengers: Endgame, Spider-Man: Far From Home, and all the PHASE 4 announcements, this was definitely the summer of Marvel for me. Then I saw the new poster for Rise of Skywalker. It shook me out of my Marvel coma and now I’m back in the Star Wars game! You can watch it right here, posted below:

I’ll be honest, I got chills watching this trailer. Because it’s not just a movie, it’s crazy to think that back in 1977 your parents would’ve been sitting down in a movie theater waiting to see the original Star Wars. Now you could take your own kids to see the final film in the series. We know that we’re going to keep getting Star Wars movies after Episode IX, but this is the end of The Skywalker Saga. The nine film, legendary, epic that George Lucas first teased decades ago. Now, we’re finally getting to see the end of that story. The beautiful thing about Star Wars is that there’s been a new Star Wars movie out every single decade since the 70s, so it’s truly a multi generational story.

Telling stories is part of who we are as humans. People huddling around the campfire together, telling tales of good and evil, love and family, adventure and heroes. Star Wars is primal. Despite the fact that some of the Star Wars films have a major faults, I honestly I love all of them, because I love the universe Lucas created. This is it: the end of The Skywalker Saga. I have faith that J.J. Abrams is the man to bring this on home and give us a satisfying ending to one of the greatest stories ever told.

The last shot of the trailer shows what appears to be Rey going full Dark Side. Black cloak, sick double bladed trick red lightsaber, the whole deal. I don’t think what we see in that quick moment can be taken at face value. It can mean a whole number of different things. I would love to hear your theories though! Anyway I did want to include these 2 awesome pieces of fan art, that shows what Dark Side Rey could look like, made by one of my favorite artists BossLogic ( follow him on Twitter he doesn’t amazing stuff!).

Anyway, below we have some more cool Star Wars news from the D23 Expo. Check it out. More STAR WARS new from D23:

Another cool announcement at D23 was confirmation that a live action Obi-Wan Kenobi series starring Ewan McGregor will be premiering Disney+. According to an interview Kathleen Kennedy, the head of Lucasfilm, gave to EW.COM, there are scripts currently being written with production to start early next year. Even though it may be a little while before we get to see the series, it’s still cool to know that it’s finally happening.

Disney/Lucasfilm also showed an up to date time lines of the films and shows that are currently “in canon”. Take a look…

So, what did you think of the new trailer? Do you think Rey is really going to the Dark Side? Which of the upcoming Star Wars TV shows are you most looking forward to? Comment below or reach out to us on social media! We always love hearing from you guys!

Thanks for reading! Follow me on Twitter @PJWrightWBM or type Worlds Best Media into the search bar, you can also like and follow us on our Facebook page; World’s Best Media. Those likes and follows, as well as iTunes reviews, go a long way to supporting the show. We really appreciate the loyalty shown to us by World’s Best Media fans, so thanks again!

From Max Brooks the author of the best-selling World War Z, comes Devolution: A First Hand Account of The Rainier Sasquatch Massacre. In this fantastic and fun mix of horror, survival story, and dark comedy, Brooks does for Bigfoot what he did for Zombies. Like World War Z, the novel’s story is told through recovered journal entries, interviews, and news reports. This book is a blast from start to finish and a great summer read! 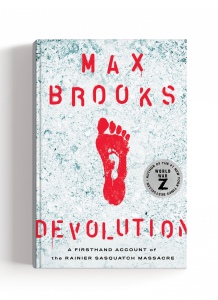