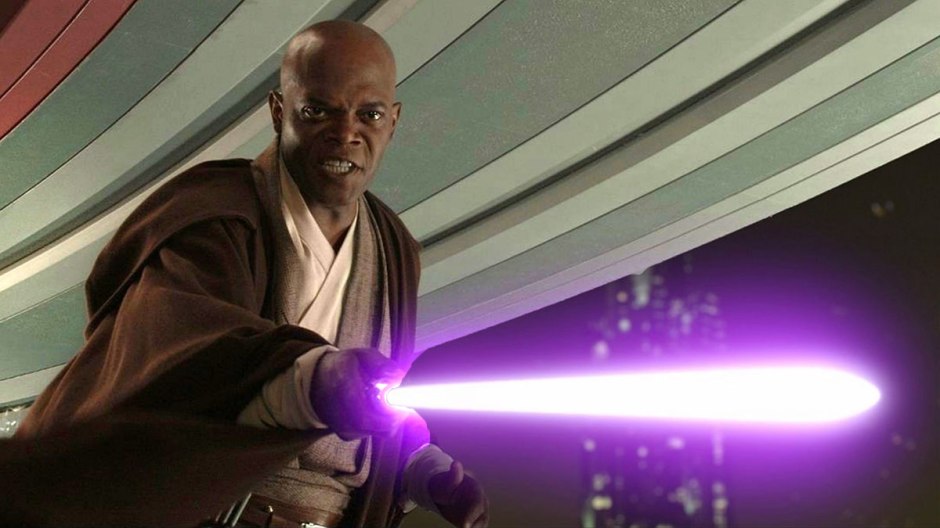 With the final season of Star Wars: The Clone Wars on Disney+ recently premiering, as well as a small behind the scenes video clip that just surfaced, now is the perfect to time to talk about one of my favorite supporting characters in the Star Wars Universe. Samuel L. Jackson is simply one of the coolest motherfuckers around. Nick Fury, John Shaft, Zeus in Die Hard With A Vengeance, Jules Winnfield, the list of badass characters he’s played over the goes on and on. To Star Wars fans, he’s most beloved for his role as Jedi Master, Mace Windu, one of the more popular characters from the prequel trilogy. As powerful member of The Jedi Council at the height of their power, Mace Windu personified the very best and the worst of The Jedi. The prequel trilogy is just as much about the fall of the Jedi as it is about the fall of Anakin Skywalker. Mace perfectly personifies the characteristics that led to the downfall of the Jedi. He’s a skilled warrior with a lightsaber and one of the most powerful force users in the galaxy, yet he’s shortsighted, judgmental, and arrogant.

From their first meeting, continuing throughout the prequel trilogy, Mace is distrustful and condescending towards Anakin. Mace Windu is at the heart of Anakin’s feelings of alienation and frustration with The Jedi Council. It could be argued that if Mace treated Anakin differently, his choice to walk the path towards the Dark Side may have played out differently.

When the Jedi realized that Chancellor Palpetine was actually Darth Sidious, Mace Windu and a group of Jedi are dispatched to arrest him. Chancellor Palpetine made quick work of the other Jedi, displaying his impressive lightsaber skills. Only Windu is powerful enough to challenge the Sith Lord.

The fight between the two powerful Force users ends in a stalemate, with the slight edge going towards Mace Windu. That’s when Anakin walks in. Master Windu tells Anakin that the Chancellor is too dangerous to be left alive and must be killed to preserve peace. The choice to save the Chancellor or to allow Master Windu to kill him, is one of the most important choices in the life of Anakin Skywalker and it’s the choice that ultimately leads him to become Darth Vader.

When Anakin finds Mace standing over Palpetine, on the verge of killing him, Anakin see‘s a trusted old friend who has vowed to help him save the life of his wife and child and a man attacking his mentor and has treated him with nothing but scorn his entire life. There isn’t really much of a fucking choice at all here. Given the relationship he has with these two men, it’s pretty goddamn understandable the Anakin would cut Mace’s Lightsaber hand off and allow Palpetine to Force Lightening him out the window of a 200 story building. So came the end of Mace Windu, a cool character in Star Wars lore who played an important role in Anakin Skywalker‘s transformation into Darth Vader and that was the end of his story… or so we thought!

Star Wars fans are a rabid bunch (myself included). Fans tend to jump on every aspect or detail shown a long time ago in this galaxy far, far away. Especially lightsabers. Any new lightsaber is analyzed in great detail (and why not? They’re cool as fuck). So naturally, when the prequels were in production, fans noticed that Mace Windu had a purple lightsaber. Everyone knows that it goes: blue & green= Jedi, red= Sith (some “neutral” Force users like Ashoka Tano wield white lightsaber). Of course, it was immediately noticed that Sam The Man Jackson had a PURPLE lightsaber. I, like most Star Wars fans, assumed that Sam Jackson got a purple lightsaber because purple is kind of his personal color. As well as, being the bad ass, cool, son of a bitch that he is, it isn’t very surprising that he would want some detail to be included that made him stand out from the rest of The Jedi. Now, a video has surfaced from the set of the prequel trilogy and we can find out exactly how Mace Windu’s purple lightsaber became a reality (remember that behind the scenes video clip I mentioned at the top of the article?). Check out the video below…

So, there we have it! It pretty much came down to George Lucas telling Jackson “The Jedi have blue and green lightsabers and the Sith have red ones.“. Which prompted Sam Jackson to ask “Can I have a purple one?“ With Lucas shrugging and replying “Sure. What the hell?”. I know that’s not a verbatim account, but it’s pretty much the gist of the origin of the purple lightsaber!

Look, I’ll be honest with you. There’s never been much mystery about Samuel L. Jackson‘s purple lightsaber. This video surfaced online and it seemed like a good  excuse to write a Star Wars article about Samuel L. Jackson’s Mace Windu. I think he’s a really cool character with a lot of potential to be used in future stories, live action or animated.

Oh, I’m sorry? What’s that you’re asking? Didn’t he die when Anakin cut one of his hands off with a lightsaber and Sidious blasted him with Force Lightning out of a 200 story window to fall to his death? Well, technically that’s all true. But a few years ago the character was brought up to George Lucas. I’m not sure what the circumstances were, maybe somebody was pointing out that people have survived far worse in the Star Wars universe then Mace Windu’s fate. Anyway, Lucas said that as far as he and the Star Wars canon is concerned, Mace Windu somehow survived that brutal brush with death. Even though all official canon is technically decided by Disney now, they stood by Lucas’ assertion that Windu was still alive, out there, somewhere. I mean, Darth Maul got literally cut in half a fell into chasm so deep that the bottom wasn’t visible, but he got better! Why not Mace?!

Jackson himself has said, if the opportunity arises, he’d love to return to the character. So, if the stars aligned and there was an opportunity to have Samuel L. Jackson return to play an older, more banged up Mace Windu, where exactly could we see the character pop-up? To me, there are two very cool and very obvious option….

First, we must ask ourselves a few questions: What has he been doing since his apparent death? I don’t think the surviving Jedi have a very good idea of exactly how many other powerful Force users there are left in the galaxy after the rise of The Empire. Or in the case of a character like Ezra from Star Wars Rebels, he may be so far away, maybe even no longer in the same galaxy, that they can no longer sense him. That would explain why characters like Yoda, Luke, Vader, and Rey all state at various points that they are the last of The Jedi. In fact it’s possible that by the time of Luke Skywalker‘s death there could be as many three other living and powerful Jedi/Force users: Ezra Bridget, Ashoka Tano, and of course Mace Windu… (Like the piece of art above, there is a lot of cool fan art of Mace Windu if he survived Revenge of The Sith, which I’ll be including in this article).

So, if Mace Windu survived his encounter with Anakin and Palpetine, why haven’t we seen him in in any of the movies or TV shows since? I think like Obi-Wan, Yoda, and the other Jedi who survived Order 66, he most likely went into hiding. Like other survivors of The Fall of The Jedi, the events of Revenge of The Sith would have taken an enormous emotional toll on him. As one of the most senior and powerful members of The Jedi Council, he was one of the guiding hands of The Order in the years  leading up to it’s destruction. Maybe he felt more personally responsible for all the pain and suffering that took place? Of course, let’s not forget his very, very serious injuries. We’ve already established that individuals, especially powerful Force users, can survive seemingly lethal injuries, but Master Windu’s physical trauma was particularly serious. It’s important to remember that physical injury can actually affect one’s ability to use The Force. Like Anakin after his duel Obi-Wan on Mustafar, despite how powerful Darth Vader was with the force, had he not suffered such horrific injuries at the hands of his former master, there’s no telling how powerful he could have become. He most likely would’ve displayed Force abilities far more impressive than any we’ve seen in the Star Wars canon, so far. Coming back to Mace, all of this adds up to a man recovering from some incredibly intense physical and emotional trauma all the while on the run from an oppressive galactic regime out to kill him.

This would mean that he would’ve most likely stuck to the planets in The Outer Rim, at the very most edge of known space. The Outer Rim includes planets like Tantooine. Maybe there’s a scenario Mace heads to Tantooine, where an old hermit has been living out beyond The Dune Sea? Locals say he mostly keeps to him self, but trouble has a way of finding him every now and again. They say he’s some kind of wizard, goes by Ben Kenobi. Could be a cool storyline in the upcoming Obi-Wan live action series, right?

Then, there’s The Mandalorian bounty hunter Din Djarin, running around The Outer Rim with his adopted son, a small green alien with strange and powerful abilities. Who better to give Mando the 411 on The Kid than Mace Windu? Really he would fit pretty easily into either show.

I think if Samuel L. Jackson appeared on either series, it would definitely be a guest appearance, maybe a multi-episode guest starring arc. I don’t think we’d see him  become a series regular on either show. Before any of you naysayers out there claim that he would never make an appearance on a TV show because he’s too big of a star, let me let me remind you that he appeared on Agents of S.H.I.E.L.D. in the first season multiple times and played a major role in the season one finale of that show. If Lucasfilm can’t get Jackson to come back, the character could always appear in a comic book or a novel or a video game. Who knows? I think most fans would really like to see him in live action, but however they choose to use the character, I think it is long past due that Mace Windu made his return to the main stage of the Star Wars Universe.

Thanks for reading! Follow me on Twitter @PJWrightWBM or type Worlds Best Media into the search bar, you can also like and follow us on our Facebook page; World’s Best Media. Those likes and follows, as well as iTunes reviews, go a long way to supporting World’s Best Media. We really appreciate the loyalty and support shown to us by our fans, so thanks again!